Bikes and Feet in San Diego 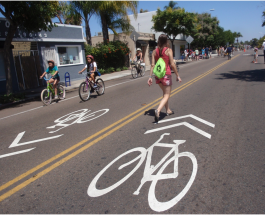 CicloSDias on August 11, 2013 was a momentous event in the active living history of San Diego. By giving a few miles of streets over to the age-old pastimes of biking and walking, San Diego has taken a big step into the mainstream of the 21st century. Many cities have realized that investing in biking and walking is a way to improve health, environment, the economy, tourism, social capital, and overall quality of life. San Diego is late to this party, but CicloSDias is a sign we have crossed a threshold.

The big news is that CicloSDias was a blast, and many people came out to enjoy quiet, safe, car-free streets on bikes, feet, skates, skateboards, wheelchairs, and something that looked like a pickle. It was great to see people of all ages, sizes, and colors moving and smiling. There were thousands of children on tiny bikes, and lots of dogs who took their "masters" for a spin. The 5-mile route through low- and high-income areas drew heavily from the local neighborhoods, but people came from throughout the county. Highlights were an Mexican American street market, a local chocolate shop giving free samples, hard decisions about which restaurant or pub to visit, and the perfect weather (of course).

The event was organized by the City of San Diego, led by Ed Clancy, who is the bicycle events coordinator. There were many community organization and business partners who contributed to the success. Of special note are the San Diego County Bicycle Coalition, WalkSanDiego, and DecoBike which will be creating a San Diego bike sharing program early in 2014. The spirit of volunteerism was strong, and I am pleased that almost everyone from our office was either a volunteer or participant at CicloSDias. All of these groups and more made participants feel welcome at four "hubs" along the route. Hubs were a place to get a fruit snack, learn about the partner organizations, meet new friends, and take a survey.

Survey?  Yes, CicloSDias is being evaluated. Jordan Carlson from UCSD and Sherry Ryan from SDSU organized the evaluation, with support from The California Endowment and Sudberry Properties, a local developer. Volunteers counted people at three locations, 1000 people completed surveys at the event, and many more answered a few questions by placing stickers on attractive posters. Thanks to Aaron Hipp in St Louis for the poster idea. Businesses along the route were surveyed. Community-wide surveys before and after CicloSDias will tell us about awareness, promotion of the event, level of interest, and support for pedestrian- and bicycle-friendly policies. Stay tuned for results.

Being a veteran of three Ciclovias in Bogota, Columbia, the city that invented the idea, I can assure you that San Diego has a long way to go. In Bogota they close 100 miles of streets every Sunday and holiday. The routes connect many parts of the city and bring people to 20 parks where dance and exercise classes are held every hour that draw thousands. They have been doing this for 30 years, and politicians who want to save money by closing down Ciclovia simply do not get elected. But let's not emulate others. Let's build CicloSDias into a signature event that helps define the San Diego lifestyle. Let's build CicloSDias into a weekly, city-wide event that allows each neighborhood to share its charms with everyone else and introduces new clients to businesses on the route. If we can do that, San Diego will be a healthier city in many ways.

UPDATE: On March 30, 2014, San Diego held it's second CicloSDias event in the neighborhood of Pacific Beach. Check out my blog for highlights from our second open streets event.

Check out these great photos from the August 11, 2013 event! CicloSDias attracted hordes to local restaurants to fuel up. There was even a mobile doctor on the route. Participants were happy to complete surveys and answer questions on the posters. One of many unusual conveyances. Here I am with doctoral student Jessa Engelberg, who was counting participants, and Elena Martinez, a colleague at UCSD who loaned me a bike.