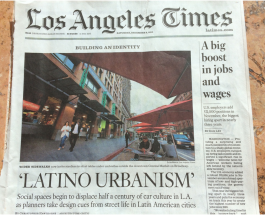 The December 6th edition of the Los Angeles Times had a front page article on "Latino Urbanism" by architecture critic Christopher Hawthorne. The article features pedestrian enhancements of iconic Broadway in downtown LA that include conversion of parking and traffic lanes to pedestrian use and planters and cafe tables with umbrellas. LA is now about 50% Latino, and these and other immigrants are now a force altering the city's car-dominated landscape to include more pedestrian, bicycle, and public uses such as parklets and small-scale commerce like food carts.

Thus, Los Angeles is physically resembling more and more the countries where many of its residents have roots. The trend is affecting the whole city. Previous Mayor Antonio Villaraigosa prioritized walking, biking, and transit. Current Mayor Eric Garcetti is taking this emphasis further with integrated updates of zoning codes, transportation plans, and health and wellness guidelines. This coordinated reconceptualization of the city's goals is designed to reduce car-dependence, improve safety of walking and biking, and improve park access. As a proponent of active living, I find this a great example of infusing health goals into the everyday work of multiple city agencies. Not only is this effort generally consistent with research on active living, but the new codes and guidelines will institutionalize a health orientation for the long term.

"Latino Urbanism" is a concept credited to planner James Rojas, who is mentioned in the article. I had the pleasure of being on a panel with Mr. Rojas earlier this year at the National Council of La Raza health summit. He described his work engaging children and adults in low-income communities to design improvements to their neighborhoods. What people want is usually consistent with making neighborhoods more activity-friendly.

The transition from car-focused planning to true transportation choice in LA will not be a smooth road. Mr. Hawthorne points out the risk of gentrification as more people are attracted to increasingly pedestrian-friendly but currently low-income neighborhoods. The architecture critic has surprised me by writing often about bicycling in LA, with regular stories of growing bicycle and walking cultures despite widespread driver hostility toward bicyclists. However, today's article shows that Latinos in particular have become a powerful voice for making it easier for many to live more active and healthier lifestyles in Los Angeles. This is an example of reverse acculturation, where the immigrants are remaking their new home in the image of their original countries. In this case, the result is likely to be better health for everyone.

The online version of the article has video, additional photos, and links to related articles.