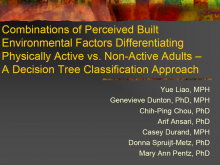 Methods
The sample consisted of adult residents in San Bernardino County, California. Study participants each wore an Actigraph accelerometer for 7 days. Data from accelerometer were considered to be valid if participants wore the accelerometer for at least 10 hours per day for four days. Participants were considered to be physically active if they attained an average of at least 30 minutes of daily moderate-to-vigorous physical activity (MVPA). Items from the self-reported Neighborhood Environment Walkability Scale (NEWS) were used as perceived measures of the availability of nearby parks, recreation centers, and gyms; presence of sidewalks, pedestrian trails, and crosswalks in the neighborhood; access of local shops, places, and public transit; shade, litter, and traffic along streets; crime during the day and overall satisfaction of walking environment in the neighborhood. Decision tree, a binary classification method, was used to identify the key predictors and combination of the predictors that distinguish between physical active and non-active adults. Combination of predictors and the associated cut-points were selected by decision tree based on the conditional probability that can minimize the entropy in the model. Age, gender, ethnicity and household income were also included in the decision tree model. Analysis was performed using JMP 9.0.0.

Results
A total of 340 adults with valid data were included in the analysis. Participants were 85% female, 52% Hispanic, and 34% annual household income less than $40,000 with a mean age of 39 years (SD=6.0, range from 23 to 62 years). Thirty-one percent of the adults were physically active according to their accelerometer data. The probability of being active was .4227 for adults living in a neighborhood with crosswalks and many places to go nearby. For neighborhoods with crosswalks but not many places to go nearby, older adults (>= 45 years old) were most likely to be active if there was a recreation center within 20-minute walking distance (Prob=.6942). Younger (<45 years old) non-Hispanic adults living in neighborhoods with crosswalks but not many places to go nearby were most likely to be active when there was a park more than 10-minute walking distance (Prob=.5379). Physically non-active adults were most likely to live in a neighborhood without crosswalks and without access to local shops (Prob=.9044). When defining people with a probability of being active greater than .50 as in the “active” group, the accuracy of predicting group membership is 70.5%.

Conclusions
Lack of crosswalks and local shops in the neighborhood were risk factors for physical inactivity. Although lack of many places to walk to in the neighborhood also appeared to be a risk factor, having crosswalks and a nearby recreation center appeared to help older adults to overcome this deficit. Also, having crosswalks and a park nearby served as a protective factor to combat a lack of many places to walk to for younger non-Hispanic adults. This study demonstrates the value of using decision tree classification methods to identify the combinations of environmental factors that predict physical activity. Decision tree allows researchers to better understand the relationship between built environment and physical activity in a multidimensional way. Results from this study suggest the potential need for tailored built environment designs for adults of different demographic subgroups.