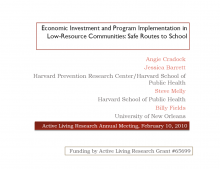 Background:
Considerable public investment in infrastructure and programming to promote active transportation to school has recently been undertaken through federal legislation. In 2005, the Safe Routes to School (SRTS) program was added in the reauthorization of the transportation bill, Safe, Accountable, Flexible, Efficient Transportation Equity Act: A Legacy for Users, (SAFTEA-LU). Limited attention has been paid to patterns of distribution of SRTS funds across geographic areas. A previous analysis of federal funding for walking and bicycling improvements from 1992-2004 found that implementation across the country was not uniform. Bicycle and pedestrian projects were less likely to have been implemented in counties characterized by persistent poverty and lower educational attainment of county residents than in areas without these characteristics. The level of investment in infrastructure and improvements, particularly in these low-resource areas may have important impacts on injury prevention as well as in decreasing the potential barriers to being physically active in transportation to school.

Objectives:
In this study, we document economic investment in communities through the SRTS program and measure successful implementation of this program, with a focus on low-resource communities. Objectives for the first and current phase of this study are:
1) Examine the distribution of funds across states, regions, and areas defined by population and demographic characteristics (e.g., percent poverty, educational status, race/ethnicity) provided for by federal transportation programs.
2) Develop measures of successful SRTS economic investment and project implementation in low-resource communities based on stated objectives of the SRTS program.

Methods:
This study uses a repeated measures, cross-sectional observational design with program funding and implementation data collected by year for each state. Preliminary data documenting state-level federal economic investments in all 50 states and the District of Columbia (hereby referred to as a state) through the SRTS program were obtained from the Federal Highway Administration’s funding database, the Fiscal Management Information System (FMIS). Preliminary descriptive analyses were conducted to summarize funding obligations for FY2006-2008 in total and by state, year, reported activity category (i.e., noninfrastructure, infrastructure, either), and per capita (per public school student enrollment in grades K-8, from the Common Core of Data, National Center for Education Statistics). Federal SRTS obligations for FY2006-2008 were also compared to measures of prior federal expenditures and project implementation for bicycle and pedestrian improvements from 1992-2004 to examine potential associations between success in earlier bicycle and pedestrian improvements and subsequent success in securing SRTS funding.

Results:
Preliminary descriptive analysis of SRTS economic investments revealed that $140,243,000 were spent in states (N=51) through the federal program during FY2006-2008. All 51 states obligated funding during at least one fiscal year to implement SRTS projects. Thirty-one states (61%) obligated funding all three years, while 16 states (31%) obligated funding during two years. Four states (8%) obligated SRTS funding in one year. Federal funding obligations for SRTS varied across states, with total funding through FY2008 ranging from $100,000 to $12,301,000. No state obligated the legislation-specified minimum annual $1,000,000 allocation in all three years, and 17 states received less than $1,000,000 every year. Median per capita funds per student (K-8) were $5.01 and ranged from $0.14 to $77.38. Across the three years, 63% of funds obligated were for infrastructure activities, 23% for non-infrastructure activities, and 15% for flexible funding projects including either infrastructure or non-infrastructure components.
States with prior success in implementing bicycle and pedestrian improvements were also successful in SRTS project implementation. Prior investments via federally-funded bicycle and pedestrian projects from1992-2004 were directly associated with SRTS investments from FY2006-2008 both overall (β=$6,137; SE=$2,633; p=0.02), and on a per capita basis. Prior per capita (per 2000 Census total population) federal expenditures on bicycle and pedestrian projects were directly associated with per capita (per K-8 student enrollment) SRTS federal expenditures between FY2006-2008 (β=$0.34; SE=$0.08; p=0.0002).

Conclusions:
Preliminary results suggest that federal economic investments in the first three years of the SRTS program have increased over time and varied substantially across states. States have obligated, on average (according to the median estimate), $5 per K-8 student on SRTS projects across all three years. Prior success and experience in implementing federally funded bicycle and pedestrian projects is associated with successful SRTS project implementation. Further analyses will examine distribution of economic investments and program implementation according to community characteristics, particularly in low-income areas, and at the county level.