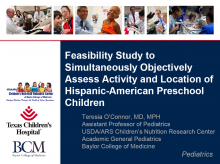 Conclusions
It is feasible to simultaneously measure and process GPS and accelerometer data on Hispanic-American preschool children. Good between-method correspondence was found for location and moderate correspondence was observed for mode of travel. Location was associated with different activity levels even in this small sample. The simultaneous use of GPS and accelerometers will be used by this team in larger studies to investigate where Hispanic-American preschool children are active.