Physical Activity Among Middle School Students in Somerville, MA: Trends Over Time and In Relation to a Comparison Community

Physical Activity Among Middle School Students in Somerville, MA: Trends Over Time and In Relation to a Comparison Community 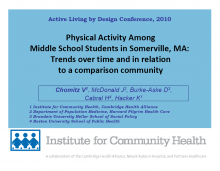 Background:
Obesity continues to be a major public health problem in the United States. As of 2007, 28.8% of adolescents were either overweight or obese. The rise in obesity may, in part, be attributable to declines in physical activity (PA) levels. In 2007, only 34.7% of adolescents met the national PA guidelines. Since PA levels decrease between childhood and adolescence, the middle school transition is a particularly vulnerable period that warrants special attention.

Objectives:
This study evaluates PA among a diverse population of middle school students (6th-8th grades) in Somerville and a neighboring comparison community concurrent with Somerville’s ALbD promotion efforts. Specifically, we will 1) document Somerville PA trends over time; 2) examine between-city differences in meeting PA recommendations; 3) explore the relationship(s) of utilization of recreational space and social support on PA; and 4) discuss the policy implications of our findings.

Methods:
A retrospective observational study was conducted among 12 middle schools in Somerville and a socio-demographically comparison community in metro-Boston. The analytic approach was twofold. First, trend analysis assessed differences in PA levels within Somerville pre- (2003) and post- (2007) intervention. Second, between-city comparison analysis assessed differences in PA at post-intervention to explore the impact of city-specific utilization of recreational space and social support on PA levels.

Study data were from an anonymous, self-reported Youth Risk Behavior Survey from Somerville (2003, 2007) and the comparison city (2007 only). The survey included questions on demographics, television viewing, walking to school, and other health behaviors. In 2007, customized, supplemental questions regarding recreational space usage and social support for PA were added to the survey.

Results:
Approximately 1000 6th-8th grade students responded at each time point per city. Demographically, the communities were similar post-intervention, although significant changes in the racial/ethnic composition of Somerville students occurred 2003-2007; the percentage of Hispanic students increased (18.5% to 27.1%) and White students decreased (49.9% to 39.9%).

Support:
This research was funded by a grant from the Robert Wood Johnson Foundation’s Active Living Research Program.