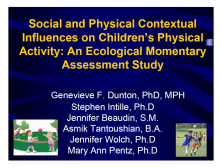 Background:
Recent studies have identified links between social support, the presence of built environmental features, and children’s physical activity. However, little is known about how environmental characteristics impact the experience and level of physical activity taking place in those settings. Children may visit facilities or use resources in their neighborhood without engaging in physical activity bouts that are of the necessary intensity or duration to prevent obesity. Behavior setting theory suggests that attributes of one’s immediate situation, such as type of social company and physical location, can shape mood and behavior occurring in that setting. Preliminary studies have shown that children are more motivated and engage in higher intensity activities when in the presence of others as compared to when they are alone, and when outdoors as compared to inside homes. Yet, no known research has examined children’s physical activity behaviors and experiences across the full range of settings in which they take place throughout the day. This limitation may be partially addressed by real-time data capture methods such as Ecological Momentary Assessment (EMA), which can simultaneously measure where and with whom children’s physical activity occurs, as well as how children feel in those contexts.

Objectives:
This study used EMA with mobile phones to determine whether physical activity levels and experiences differ across social and physical contexts among low-to-middle income, ethnically-diverse children in Southern California.

Methods:
A sample of 49 children (ages 10-14 years) participated in four consecutive days (Fri. at 4pm to Mon. at 8:30pm) of EMA monitoring during discretionary time. No prompting occurred during school hours on Monday. Each EMA item sequence was prompted with an auditory signal at a random time within each of 20 preprogrammed two-hour intervals across the four days. Using the display screen on an HTC Shadow mobile phone, children responded to questions about their primary activity (e.g. active play/sports/exercise, watching TV/movies), social company (e.g., family, friends, alone), physical location (e.g., home, outdoors, school), enjoyment (i.e., “How fun is this activity?”), and current mood (i.e., happy, joyful, mad, anxious, sad). Children simultaneously wore an Actigraph GT1M accelerometer. Reports of active play/sports/exercise were time-matched to the number of minutes in moderate-to-vigorous physical activity (MVPA) (≥ 3,582 counts) measured by accelerometer in the ± 30 minute window surrounding that EMA prompt. Only children with at least one report of active play/sports/exercise and accelerometer data were included in the current analyses (N = 36). Multilevel linear regressions compared physical activity levels across social and physical contexts. Using EMA prompt as the unit of analysis, predicted marginal means were calculated adjusting for age, sex, race/ethnicity, socioeconomic status (% received free and reduced school lunch), day of the week, and time of day.

Results:
The average age of participants was 11.7 years (SD = 1.3 years). Fifty-five percent were female, and the race/ethnic distribution was as follows: 34% Hispanic/Latino, 25% Mixed/Biracial, 20% White, 5% Asian, 2% African-American, and 14% Other. Approximately 14% received free or reduced school lunch. MVPA in the ± 30 minute window surrounding the EMA prompt was greater when active play/sports/exercise occurred with friends (M = 3.0 min.) than alone (M = 1.39 min.) or with family members (M = 1.24 min.). MVPA was also greater when the activity took place at someone else’s house (M = 3.56 min.) as compared to at home (M = 1.02 min.) or outdoors (M = 0.9 min.) (p’s < .06). Self-reported enjoyment of active play/sports/exercise was greater with friends as compared to alone, with family, and with multiple categories of people (p’s < .04). Mood during physical activity also differed across social contexts. Happiness and joyfulness had lower mean ratings, whereas sadness and anxiousness had higher mean ratings when children were physically active alone as compared to with others (p’s < .04). Neither enjoyment nor mood differed across physical locations of active play/sports/exercise.

Conclusions:
The current study used a novel research methodology to compare children’s physical activity levels and experiences across different social and physical contexts. For this sample of ethnically-diverse, low-to-middle income youth, engaging in physical activity with friends and in the presence of others was more enjoyable and accompanied by more positive and less negative affect than solitary activity. Time-matched EMA and accelerometer data showed that MVPA was greater with friends and at someone else’s house than other social and physical contexts. Taken together, these findings highlight the potential benefits of being physically active with peers for this age group. Results from this study support the viability of using EMA methodology in larger scale research projects that could form the basis for context-specific interventions in this age group.